How to render tallow at home 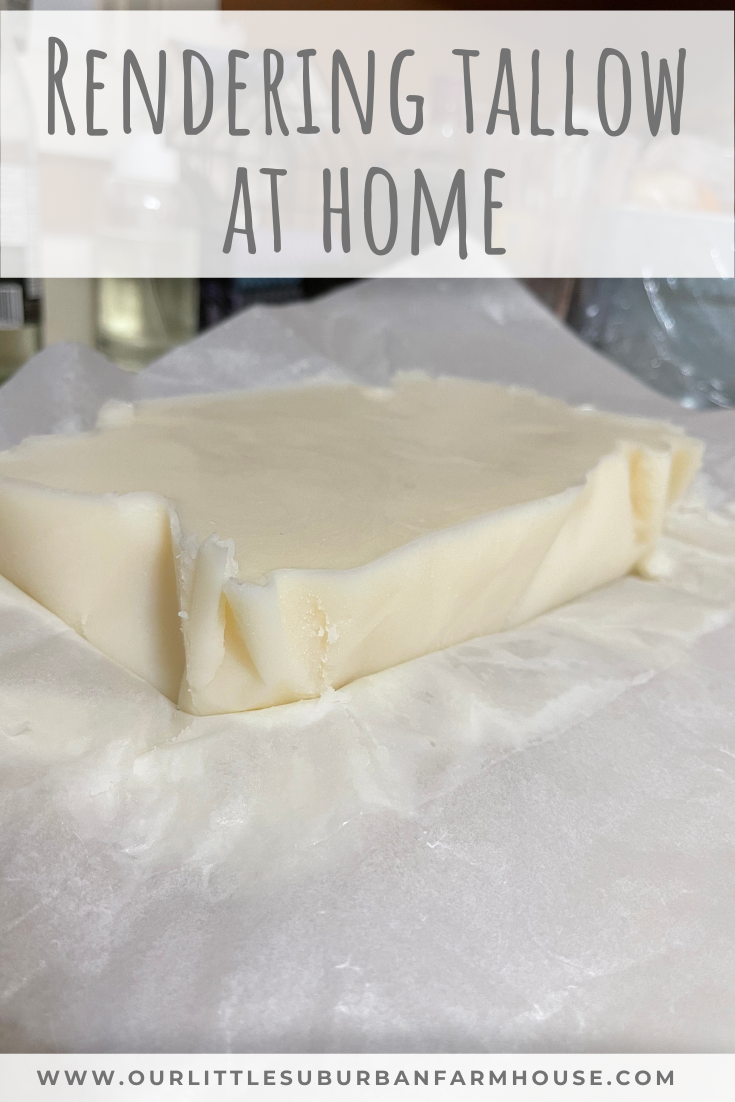 As a self-proclaimed micro homesteader I am always trying to learn more skills and I have been wanting to render tallow FOR-EVER! So why not just get it done? Well, in my neck of the woods, Ontario, Canada. Believe it or not but suet is seriously hard to get your hands on! That was until now, I finally found some at my local grocery store and I bought just about all of it so that I could make my own tallow.

Now this is not your normal suet making as the suet I found was in what I call “broken spaghetti” form. So it had already been processed down and was not as raw as other people seem to be able to find it. But as it was the only suet I could find I am going with it. That said, my rendering time will be dramatically different than you have a more raw from of suet. That said the process is the same, we still need to heat the suet above 110 degrees so that it will start to melt. We need to separate the fat from the meat and then we need to strain the two apart and let it cool into tallow.

You have most likely heard about suet in terms of bird treats, you can even find it in some nature stores. But that’s NOT the suet we want and it doesn’t answer the question of what exactly IS suet? It is the fat that surrounds the kidneys of cattle or sheep, sometimes called leaf fat. When it comes to beef suet the colour can vary depending on what type of cows it comes from. If your suet comes from dairy cows such as Guernsey’s or Jersey’s it will typically have a much more yellow hue than if it comes from beef cows. It is a form of saturated fat which has a melting point between 45-50C (113-122F) and it congeals between 36.7-40C (98-104F). It is easy enough to render your own tallow if you’re curious how I talk about it in this post.

How to use Tallow?

Tallow has many uses, my intention is to use it primarily to make cold processed soap, salves and balms. However, it can be used for cooking or candlemaking. On a more industrial scale it is also used in biodiesel, aviation fuel and as a lubricant.

There are two main methods when it comes to rendering your suet at home. You can choose to do a dry render or a wet render. The idea is that adding some water to the suet helps to prevent it from scorching as the suet starts to melt. As this was my first time attempting the reddening process I opted to go with the wet method. I figured I should stack the odds in my favour. That it is was super easy and next time I will be attempting the dry rendering method.

One con I have seen against the wet method is that while the water should evaporate off during the rendering. There was some mentions about it potentially leading to the tallow going rancid a bit sooner. That said, given that the suet will be simmering for 25-45 minutes I am pretty confident that the water will evaporate off. But it was important to give you all the information so you can make your own decision.

Now that we have all that out of the way let’s get down to the actual rendering of suet into tallow. First off we are going to need some suet. As I mentioned at the beginning up until this December I hadn’t been able to get buy hands on it. I asked at the meat counter I even called butchers in the area but nobody was selling it. So imagine my joy when I was at the grocery store this December and I walked by one of the coolers and saw some packages of suet!

Given that mine was in this broken spaghetti form I can skip the chopping step, which is honestly kind of nice!

The next step was to add it into a heavy bottomed/cast iron pan. This helps to prevent scorching and to provide a nice consistent heat through the rendering process. So I dumped it all in and set the heat on a medium/low. As I opted for the wet rendering process I added in 1/2 cup of water and then waited to see what would happen. If you are going with the dry rendering, then go ahead and skip the water.

The suet started to melt and turn milky around the edges first. Suet melts at a temperature in excess of 110 degrees. Rendering time will vary depending on the pot, the amount of suet, the size of the suet and whether or not you added water. For me it took between 25-45 minutes, but you will need to be watchful. A more raw suet could take much longer! I was nervous about knowing “when it was done” as this was my first attempt. So I watched it and it was cool to see the different stages it went though.

Next came the bubbling stage, where the surface was covered in many many bubbles that created a foam of sorts. Once the suet reaches the rendering point, the meat starts to separate from the fat, once the two separate you are on your way from suet to tallow.

After the white foamy bubble, the surface became more clear and I could start to see the meaty bits towards the bottom. I found it was important to stir those meaty bits to make sure they didn’t get stuck to the bottom and burn.

The bubbles got smaller, the liquid became clear and I could see to the bottom of the pot and where the meaty bits lay and had become crisp. At this point the next task was to get everything ready to strain and separate the tallow from the greaves/crackling (aka meaty bits).

I lined a loaf pan with two layers of parchment paper because I don’t think there is anything that can stick to this stuff! Then I need to get my strainer ready.

Into my fine mesh strainer I added two layers of cheesecloth. This is important to make sure that you remove as much of the crackling as possible. We don’t want any of it making it’s way into our tallow. I positioned the strainer/cheesecloth over the parchment lines loaf pan and CAREFULLY poured the liquid tallow and crackling into it.

I gave Bacon (my French) a little treat of some crackling sprinkled on her dinner. She was in complete support of this action and delighted in finishing her bowl of food. Next it was a waiting game.

Here it the tallow as it cools and hardens, it was very cool to watch it change as it cooled.

Here we have the finished product. Once suet is rendered into tallow it is white, hard and stores well. It is best to store it in an airtight container in either the fridge or freezer until you are ready to use it. It is important to keep it air tight so that the tallow doesn’t oxidize. I ended up using my Food Saver vacuum sealer, many other people pour the liquid tallow into mason jars. While I love me some mason jars, I had read that given tallow is so hard it can be very difficult to get it out of the jars. This is why I opted for the loaf pan method so that I could just cut off what I need. 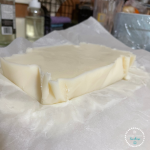 How to render tallow

Rendering tallow at home is easy and it is a great skill to have, especially if you like to cook with iota use it to make soaps, salves and balms.

Hopefully this leaves you feeling confident about making your own tallow by rendering suet at home. Personally I can’t to use my new tallow to make some soap, salves and balm. If you want to know more about making cold processed soap you can check out my post on it here. 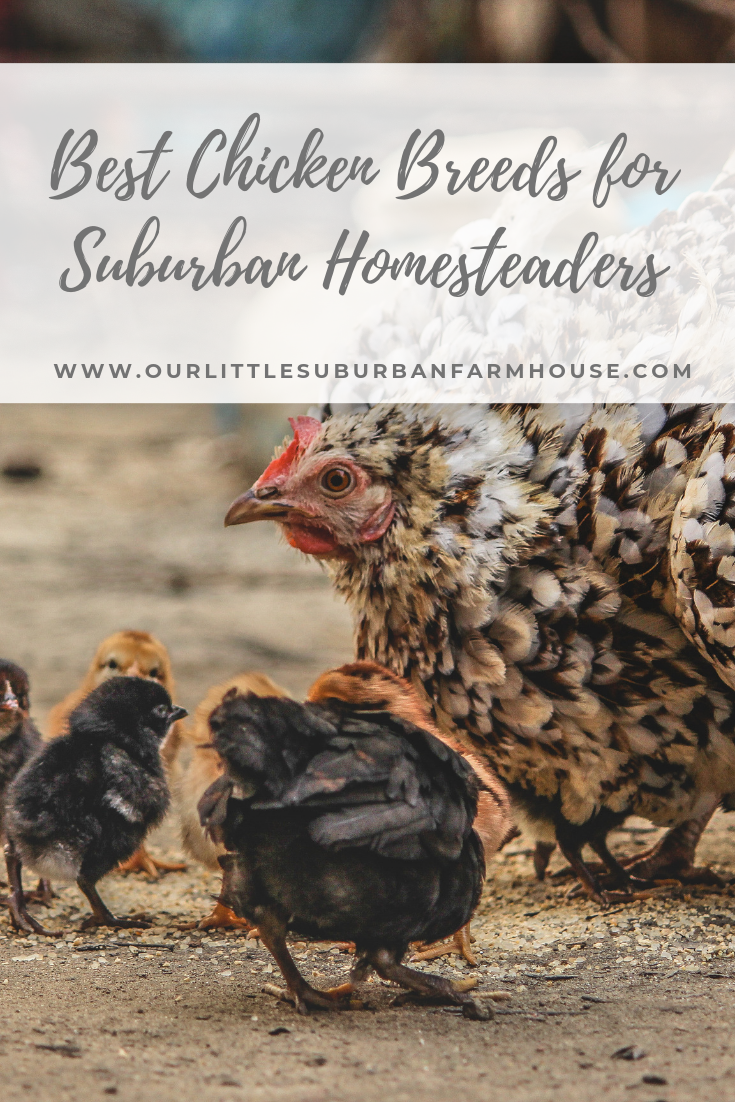 The Best Chickens for Suburban Homesteaders 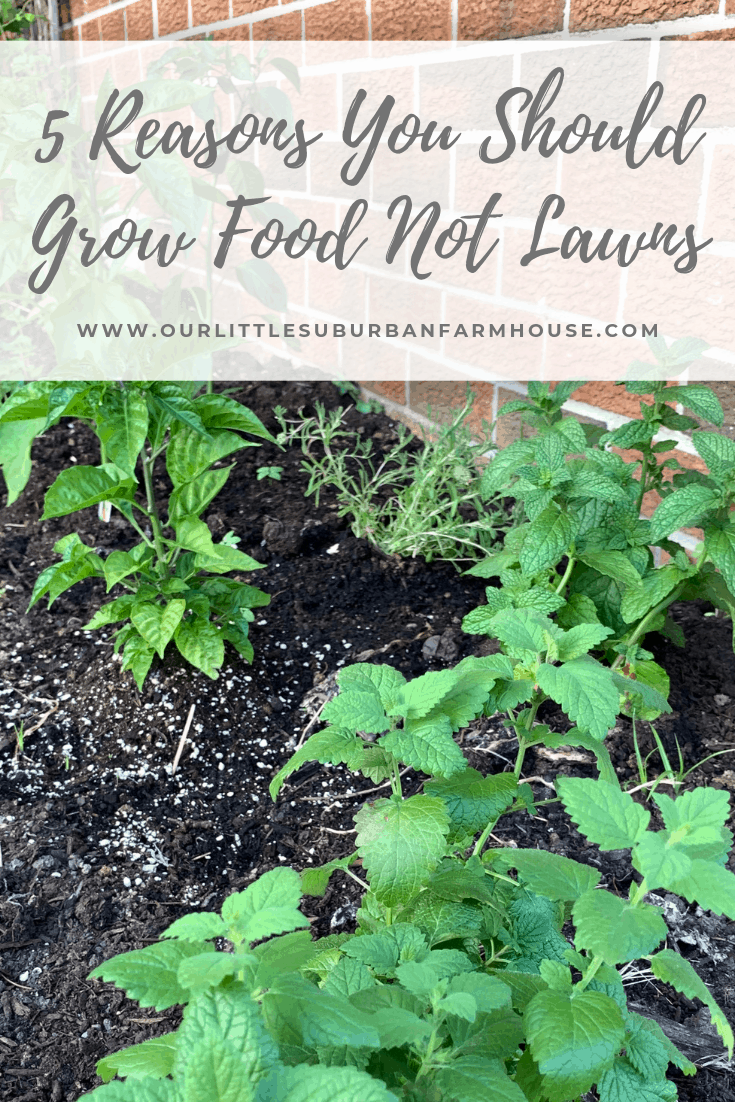 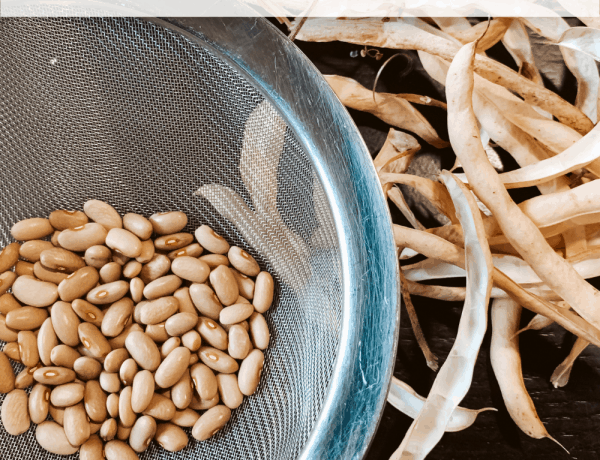 18 Plants you can grow YEAR-ROUND hydroponically

How to set garden goals for an epic harvest

New stickers! Thanks again to the epically talente

Sooooo…I may have bought a few seeds. Stay tuned

So I rendered tallow for the first time today and

Happiness is a @bakercreekseeds delivery 🥰 Wait