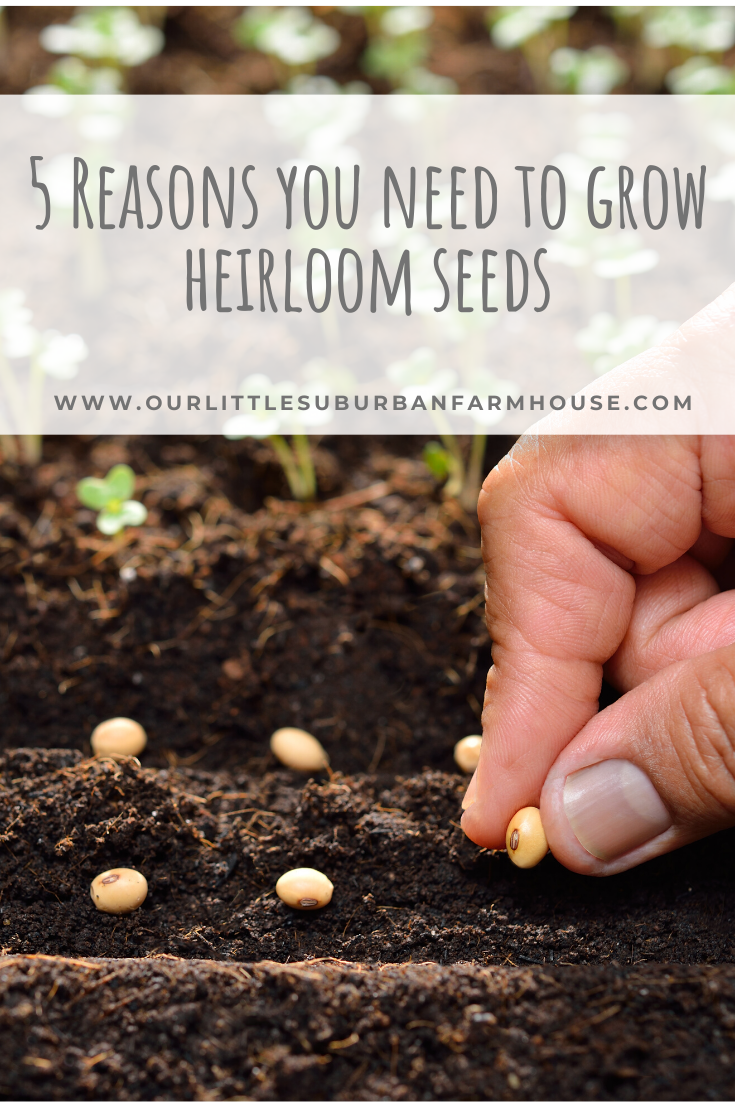 I can’t honestly say when the idea to start growing heirloom seeds first came to me. But once the idea was planted (no pun intended) I just couldn’t get rid of it.  The thought of growing only seeds that have been saved for years (sometimes over a hundred years) on my suburban homestead became a bit of an obsession. I love the idea of becoming part of the process of perpetuating these seeds forward through the years. I mean how could you not love that?

What are Heirloom seeds?

Heirlooms by definition have a value which is why they are passed down through the generations. Much like your great grandma’s crystal vase or gold jewellery. In the case of heirloom seeds, this value could come from their flavour, their vigorousness and their dependability year over year. This basically means that heirloom seeds are those from an earlier time, they are old cultivars of plants that have been saved year over year and passed down from earlier periods of human history.  They are open-pollinated and tend not to be used in modern large scale agriculture.

Historically, before World War II most of the crops grown were of the heirloom variety.  As a group, heirlooms tend to have much more diverse colours (like my Chinese pink celery), bright flavours and more nutritional value. They also bring history to your table, the pink Brandywine tomato I grow dates back to 1885!  The seeds they produce create true plants, unlike modern-day hybrids. Heirloom seeds have evolved over the years thanks to both natural and human selection.

You may have heard the term heritage seeds and are wondering what the difference is between heritage and heirloom seeds. The answer is simple, there is no difference.

Yes, heirloom seeds are non-GMO. In order to be 100% sure, when you are buying your seeds, make sure that the company you have purchased them from have taken the Safe Seed Pledge. That said seeds you are likely to buy at the store are much more likely to be hybrids (which you still don’t want) as opposed to GMO. Why? Well, making seeds GMO costs a lot of money, so companies (like the evil Monsanto) tend to invest money in making crops they view as most profitable. This generally means corn, wheat, cotton and soybeans.

Dependability is a huge reason to grow heirloom seeds. I mean if the seeds couldn’t be trusted there would have been no value associated with them and they never would have been passed down through the generations! Heirloom seeds have been known to adapt in as little as 2 to 3 growing seasons! With the next generations showing increased production, better flavour and increase disease resistance.

They are steeped in history

What is cooler than growing something in your suburban homestead or backyard garden that has been grown since say before 1591? The white scallop squash I am planning to grow this year dates back that far! They are an ancient Native American heirloom squash that is both delicious and high yielding (so another win-win). The round Tropea onions I love were brought to Italy by the Greeks who discovered it thanks to Babylonians and Assyrians! That is so much cooler than some hybrid onion from the grocery store!

They have more nutritional value (and taste better)

The Black Beauty tomato I grew for the first time last year was so incredibly dark, almost black! It also contains loads of anthocyanin, the same antioxidants that you find in blueberries and blackberries.  The Purple dragon carrots I grow are rich in anthocyanin and lycopene. The purple lady bok choy is both beautiful with its dark purple leaves and lime green stems and rich in antioxidants.

One of the reasons so many people (including myself) are turning back to heirlooms seeds is their depth of flavour. I’m sure all of you have had a firm and flavourless tomato from the grocery store! That is a thing of the past when you bring heirlooms into your garden. My go-to tomato is always a Brandywine. Which is funny because I only just found out about them a few years ago.

My parents had just come back from Portugal and they were raving about these sweet and flavourful tomatoes they had over there. They said they were called Brandywine and that they were red with some green at the top. So I did what any good daughter would do, I looked them up and ordered some seeds. Wow! I was not disappointed! They are my favourite for making homemade small batch tomato sauce. I have since branched out and now grow pink, yellow and black brandywines every year.

There are so many varieties

When you start looking into heirloom seeds you will quickly realize that they open up a whole new world of possibilities! Have you heard of walking stick kale? I sure hadn’t, you can check it out here. Then there are the 5lb Alisa Craig onions that hail from 1887! I love growing onions and I have the following heirlooms seedling currently growing in my basement garden.

I love growing varieties from around the world. This year I am adding Uzbek golden carrots (from Uzbekistan), Purple lady bok choy (from China) and Celeriac giant Prague. One day when I have my 2 acres of land I will try my hand at growing grains such as wheat, oats and barley. Then I will be able to put my Kitchen Aid grain mill to proper use and make my own flour!

It also means that you can save your seeds, which will save you money int the long run. Which is amazing because you only need to buy them once! You just need to ensure that some of the plants go to seed at the end of the growing season. Plus, saving seeds means that you can share yours with your friends in a seed swap. Keeping the seeds also helps to add to the genetic diversity of the plants themselves, which is good for everyone!

So have I convinced you to start growing heirloom seeds? Or were you already on the bandwagon? 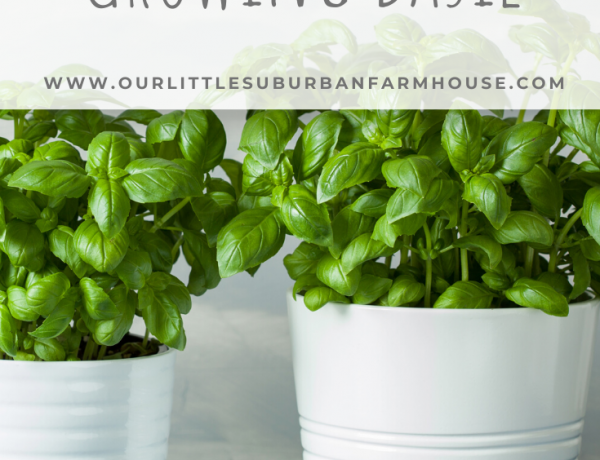 Everything you ever wanted to know about growing basil 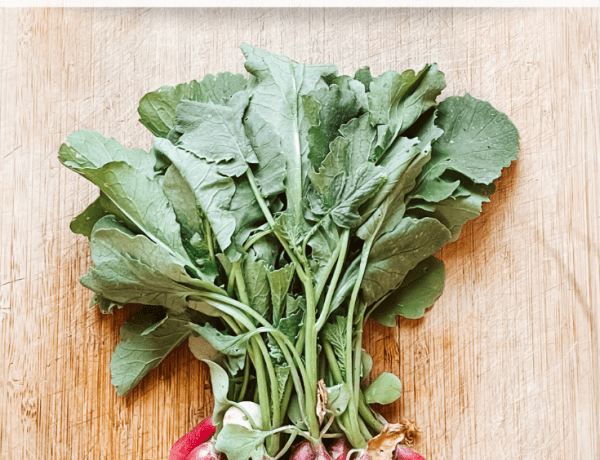 10 Things every new gardener should know 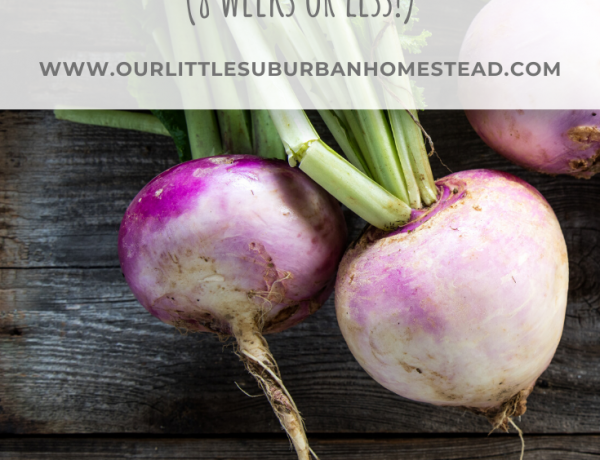 14 Vegetables you can grow hydroponically (and 10 you can’t)

I’m so excited! My new hat design just showed up

Fancy vacation breakfast with some dill fresh out

There is something exciting about an empty garden

This is what spoilt rotten looks like!!! Thank you

THANK YOU Miguel & Alicia! I am so looking forward

Pretty sure at this point I should go buy a lotter

These orange hat tomatoes are growing amazing in m

Seedling starting time is so exciting. I love the

Woo hoo! My “I dream of rainbow butt nuggets”

The mini Siam tomatoes in The High Rise are ripeni

Todays dinner was brought to us thanks to basil fr

It’s March and while Spring is just around the c

Finally! So I know what I’ll be doing this weeke

Finally starting to feel like I am almost ready fo

You all know I LOVE seeds! I was so excited to get