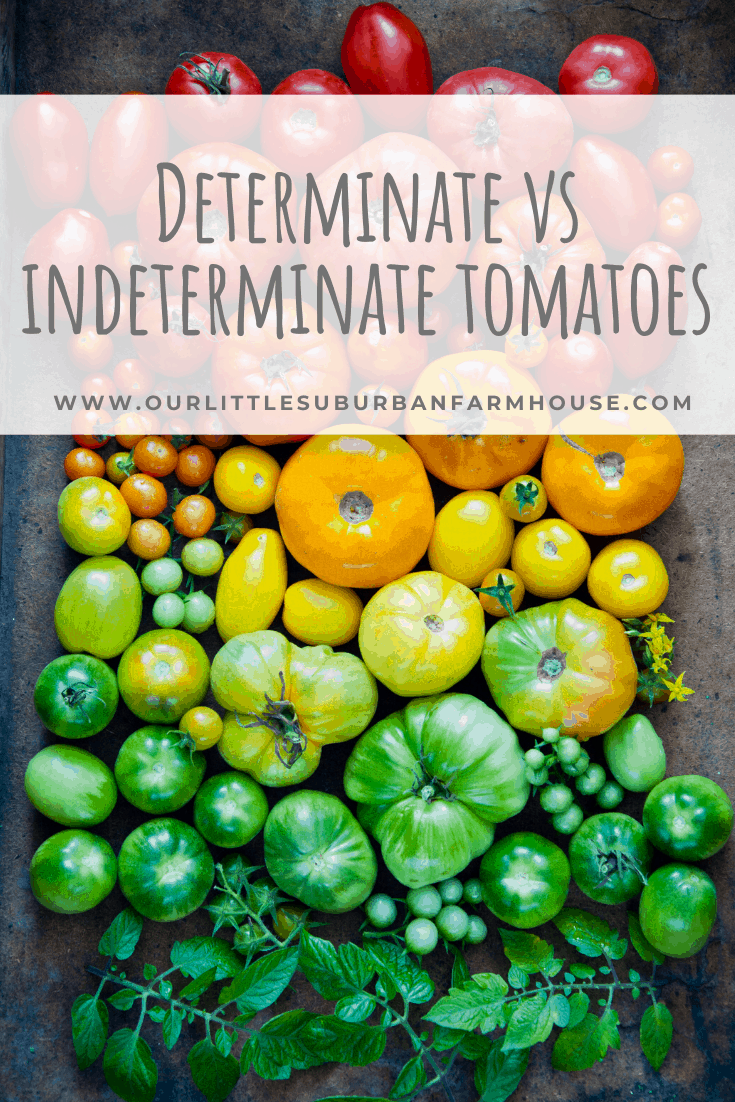 When it comes to tomatoes there are two main classifications: Determinate vs Indeterminate and Regular leaf vs potato leaf. This post will focus on the first one as it really has more impact than the second.

Tomato’s are actually berries from the Solanum lycopersicum plant. They act like vines and without staking indeterminate varieties would take over much like a pumpkin would. Have you ever noticed that if you miss staking up a branch or two, if left to their own devices they will start growing roots from the stem? That’s the vine in them trying to get out and take over the garden.

Throughout history they have incorrectly been viewed as poisonous mostly by French and northern Europeans. This was partially as they are members of the deadly nightshade family as well as due to the unfortunate interaction between the acid in the tomatoes and the pewter plates used in the past.

Tomatoes have definitely grown in popularity since they were once considered poisonous. Today there are in excess of 3,000 varieties of heirloom or heritage tomatoes being grown around the world as well as more than 15,000 known varieties. Suddenly I don’t feel so guilty about the 18 packages of tomato seeds I bought.

Determinate tomatoes (also called bush tomatoes) are much more compact and less unruly than their indeterminate counterparts. They tend to grow to between 3-4 feet which greatly reduces their need for staking. This also makes them perfect for container gardening or growing inside if you have an Aerogarden Farm Plus like I do (find out how to clean your Aerogarden). Determinate tomatoes have their height is determined by the development of fruit sets, which means they stop growing when the flowers form.

Sometimes determinate tomatoes are labelled as having poor flavour. This is due in large part to the fact that they have less leaves than the indeterminate varieties. More leaves = more complex flavour, or so the thinking goes. I’m not sure I buy into this, but the analyst in me will be sure to conduct research on this with the new growing season.

Limited pruning is needed, just take away the stems from the bottom 6 inches of the plant. This will allow for increased air flow around the base of the plant, reducing the change of mildew. It is important NOT to prune suckers off of an determinate tomato. This is due to the fact that every branch on a determinate tomatoes will bear fruit (something I wished I’d known before I pruned off all the suckers).

While determinate tomatoes are hardy, they are not going to give you and large fruit. For that you will have to look to the indeterminate varieties. However, they are perfect for container planting or square foot gardening as they are compact in size. This makes them perfect if you have limited space, especially if you are an apartment homesteader.

These types of tomatoes are fast maturing. The flowers start to appear once the plants have reached their mature height at about 45 days after planting. The fruits are ready at about 60-80 days. They also produce all their fruit at relatively the same time, over a period of 1-2 weeks. This makes them handy for the home canner as you have an abundance of fruit in a short period of time. Which is perfect for canning. Personally, I love to make my own small batch tomato sauce, which I then squirrel away and ration until the next season. But now that I am growing tomatoes year round in my Aerogarden Farm Plus in my basement, I don’t have to be so stingy with it.

While they are ideal for usage in your Aerogarden, they also deserve a place in your outdoor garden. You can use the determinate varieties as your canning tomatoes and grow indeterminate ones to eat throughout the season. Determinate tomatoes are also great when used in conjunction with square foot gardening and using the space they free up to start your fall garden.

Somewhere between determinate and indeterminate tomatoes you will find the vigorous determinate varieties. These are ones that will start out with a large initial group of fruit. Yes, I know this is like determinate ones, the difference is that they can keep producing as long as they are cared for properly. So they have the reduced height of a determinate but additional fruit like an indeterminate.

These are the powerhouses of the tomato world, and most heirloom tomatoes will be of this type. Left to their own devices they will grow and grow and grow a little bit more. If you don’t stake them then they will creep along the ground and lay down roots from their stems and just keep on going. I’m not joking, they can grow up to 12 feet tall which is crazy! That’s not to say they will all grow that big, though they tend to average about 6 feet or so which is still crazy tall.

You will want to grow indeterminate tomatoes if you have a love of those big juicy 1lb or larger fruits. You won’t find a beefsteak or one of my personal favourites a brandywine in the determinate group. These big boys are a hallmark or the indeterminate varieties. I only found out about the deliciously sweet and tasty Brandywine tomatoes after my orients came back from Portugal raving about them. I quickly ordered seeds and haven’t looked back since. I grow pink, black and yellow brandywine tomatoes every year.

A quick look at pruning tomatoes

Where you don’t want to prune determinate tomatoes the jury is undecided on whether or not you need to prune indeterminate ones. Some people say you should and other say it’s not necessary. So let me run through what I have learned and you can decide what is best for you and your indeterminate tomatoes. Most importantly, if you do decide to prune your tomatoes then please make sure to use a good set of pruners (like these) to make sure you don’t damage your plant(s).

If you do nothing else in terms of pruning, then I would suggest you do use this method. All that you need to do is prune the leaves/stems below the first set of flowers. You should also remove any leaves that are yellowing and too the plant about a month before you expect your first frost. Topping the plant just involves pinching off the top new growth from the main stem. This will help to prevent anymore vertical growth and focus the plants energy on the stems/fruit that already exist. I like to figure out the frost date and put a reminder in my phone so that I don’t forget!

What’s a sucker? It is what starts out as a little stem which grows between then main and lateral stems. They start growing out diagonally and soon after take on a life of their own. Some people feel that the growth of too many suckers causes the plant to grow less and lower quality fruit. Others however revert to the more leaves = better flavour school of thought.

If you intend to remove the suckers then you will have to be vigilant as those little buggers grow fast and furious. As soon as you see them you can pinch them off if you have nails or use your pruners (carefully) if you don’t. If however one (or more) get away from you and get big (about the thickness of a pencil) you are going to have to leave them. You don’t want to leave any big open “wounds” on the plant that could invite disease and harm the plant as a whole. If you have one of these larger suckers you can pinch out the tip just leaving two leaves to help stop it’s growth.

This is a more vigorous pruning method that removes all but the main stem. In order to achieve this you must be on top of all of your suckers! If you have a plant that looks to be developing two main stems you will want to select one and remove the other. You secure the rope at ground level, either around the stem of the plant (not my preference) or to a stake in the ground (this is what I do). Then you want to carefully and lovely wrap the rope around the stem. Then you can attach the rope to a trellis above. I will post in more detail about this method in a later post. Just be sure to leave enough room for your tomatoes to grow as they can get up to 12ft high depending on the type.

Hopefully you found this post helpful and rather than choosing one or the other types you add both to your garden. Which types of tomatoes do you grow? Determinate? Indeterminate? Perhaps both? Before I bought my Aerogarden, I grew only indeterminate tomatoes as there are many more of the out there than determinate. But for next year I am planning to have both in my outdoor garden. 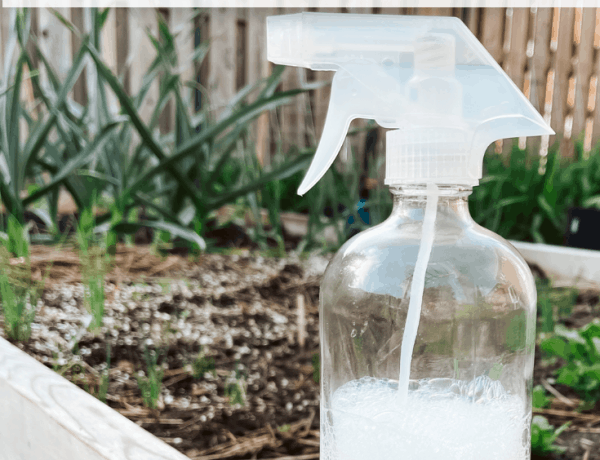 Easy homemade insecticide to protect your garden (without killing the earth) 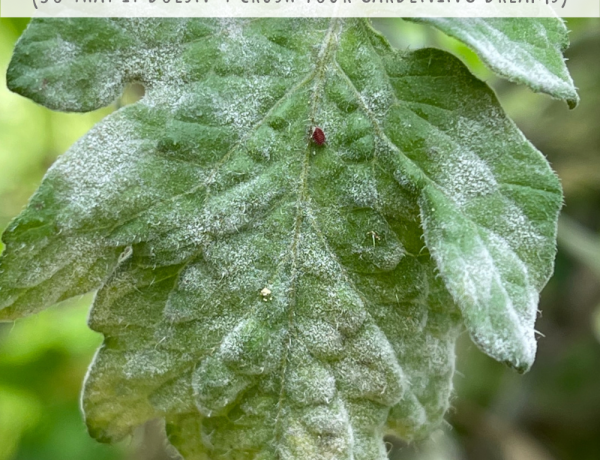 Powdery mildew and how to deal with it 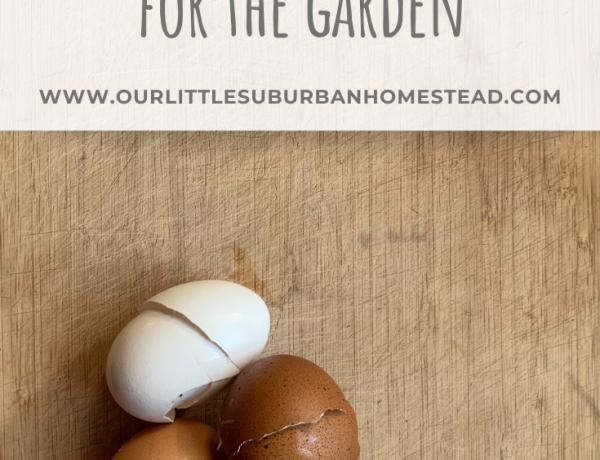 How to prepare eggshells for the garden

I’m so excited! My new hat design just showed up

Fancy vacation breakfast with some dill fresh out

There is something exciting about an empty garden

This is what spoilt rotten looks like!!! Thank you

THANK YOU Miguel & Alicia! I am so looking forward

Pretty sure at this point I should go buy a lotter

These orange hat tomatoes are growing amazing in m

Seedling starting time is so exciting. I love the

Woo hoo! My “I dream of rainbow butt nuggets”

The mini Siam tomatoes in The High Rise are ripeni

Todays dinner was brought to us thanks to basil fr

It’s March and while Spring is just around the c

Finally! So I know what I’ll be doing this weeke

Finally starting to feel like I am almost ready fo

You all know I LOVE seeds! I was so excited to get